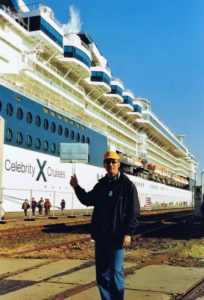 For passengers on a Baltic cruise landing in Rostock/Warnemünde, Hamburg or Stettin (Szczecin).

All Berlin tours are private - Only your group will tour in the same vehicle.

Why taking a private Berlin Shore Excursion with me?

Your Berlin shore excursion from Warnemunde to Berlin will start in Berlin close to Charlottenburg Castle - a splendid baroque palace - followed by lively Kurfurstendamm Avenue.

Along the way you’ll see, among other sights, Berlin Cathedral, the Reichstag Building (German Parliament) and the new Government Quarter and of course the Brandenburg Gate.
Naturally one of the few remaining stretches of the Berlin Wall, the tree-lined “Unter den Linden” boulevard, Bellevue Palace, the Kaiser Wilhelm Memorial Church and of course notorious sights of the Third Reich and Cold War as for example Checkpoint Charlie, the Reichstag Building, Göring's former Aviation Ministry and many other thrilling sites.

If you feel like having a typical, German hearty lunch there'll be also time for such a stop (price not included in the tour price - About USD 25.00/person).

On request, you may have a special Berlin "Jewish Heritage Tour" including an "on your own" visit to the Memorial of former Sachsenhausen Concentration Camp on the way to Berlin (About 2 hours time to be spent at the former Camp + about 3 1/2 hours time for touring Berlin).

As my associates and myself are all locals, we will also take you to some places off the beaten path and give you the opportunity to experience Berlin's history, architecture and culture in a way that is both informative and entertaining.

See and explore on your Berlin shore excursion the must-sees and classic sites as:

Of course you'll be taken also to many sites off the beaten path as well as to the the young, vibrant and hip Berlin districts as Kreuzberg, Friedrichshain and Prenzlauer Berg.

Are you planing as a company or association a meeting, a convention or an incentive in Berlin?

My Guarantee of Quality